ØH:  Much has been said about what Yoko Ono meant for the music of The Beatles and John Lennon, but what happened with Yoko Ono’s art after she married John Lennon?

IP: The art of Yoko Ono is founded not on principles of traditional visual art, but rather on those of music, language, and philosophy. That is surely one of the reasons why her works tend toward the ephemeral. In her earliest performances in the New York avant-garde scene 1960-61, Yoko Ono practiced a kind of talking chant and accompanied poetic texts she recited either alone or with others with sounds that exhibited her extraordinary vocal range. John Lennon later referred to her “revolutionary … sixteen-track voice.”

Later on, she developed some of the features that first emerged in these early performances into her own inimitable vocal style as a professional musician with her own Plastic Ono Band in concert settings. Her elaborated musical education in her childhood prepared Ono for a second career as a musician which emerged in the 1970s until today. Beginning with her first collaboration with Lennon (Two Virgins, 1968) they brought musical techniques first developed in the avant-garde context (and some of which they had developed themselves), such as tape manipulation and sound experiments, to pop music. Visual art and music (and language) was and still is extremely connected in Ono’s work.

Beside this aspect Ono also never stopped working as a visual artist – she had her first museum retrospective in 1971 – and during her relationship with Lennon she realized important films like Bottoms (1966) and Fly (1971). Her Bed-In for Peace (1969) together with Lennon after their wedding has been always considered as an important part of her performance series and her life-long engagement for peace.

ØH: Yoko Ono’s art has always been both controversial and met with mixed reviews. What were your revelations about her career working with this exhibition, and how do you think history will – or should – judge her artistic work?

IP: Before I started the project two years ago I knew only a few works and if I ask colleges they all have no idea about the comprehensive body of work by Yoko Ono. Most of her shows in Europe in the last ten years have been concentrating on her recent works and showed only some of her early works from the 1960s which is a pity: Most of her recent works are also based on earlier concepts and could not be really understood without looking back to the beginnings. There are a few “red lines” in Ono’s work and is it my goal with this show to make these lines visible. From my point of view she is one of the most exciting artists today.

The art of Yoko Ono is based above all on ideas and on verbal instructions for actions that are either utopian or actually performable. What I especially like with view to some art tendencies today (big and expensive objects) is Ono’s fundamental departure from the convention of the “work of art” created by the artist at a fixed point in time, with the object character of works, with their function as tradeable, saleable goods, and with their material value.

Ono was and still is producing works that called for the viewer’s participation and gives importance to the viewer as a co-creator of art works. The wide range of media is remarkable: Objects with poetic and utopian instructions for completion, text, film, performance, conceptual photography, Mail Art, installations, works in public space, sound pieces, and multimedia actions. This diversity of external form did not detract from the stringency of the dominant themes, which run like continuous threads through Ono’s oeuvre. Her art is shaped by basic elements and fundamental issues of human existence.

ØH: Yoko Ono is avant-garde in the word’s truest sense? In what areas has she been an innovator and role model?

IP: Without any doubt Ono was a pioneer on several levels in the art of the 1960s: Especially her Cut Piece (1964) is quoted in every book about the history of performance art. Also her use of language and conceptual ideas was very early compared to other artists. She should get more attention for her role in the history of conceptual art too.

During the past five decades, she has created an extraordinarily extensive body of work and given new meaning to the concept of avant-garde in music and art. Because she resists classification and definitive characterization, both as a person and an artist, critical reception is both difficult and mixed, yet that is precisely what sets her apart today and enables her to work as a “total artist” and serve as an inspiration for young artists.

Self-reflection remains her primary goal, and her works are meant to inspire us accordingly. She describes the process in the following words: “The natural state of life and mind is complexity. At this point, what art can offer (if it can at all—to me it seems) is an absence of complexity, a vacuum through which you are led to a state of complete relaxation of mind. After that you may return to complexity of life again, it may not be the same, or it may be, but that is your problem.» 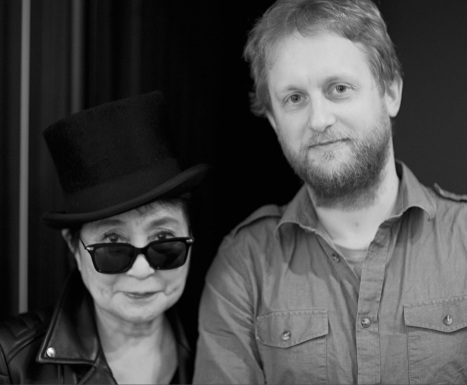 The Ballad of Øyvind and Yoko. FOTO: SIGURD FANDANGO