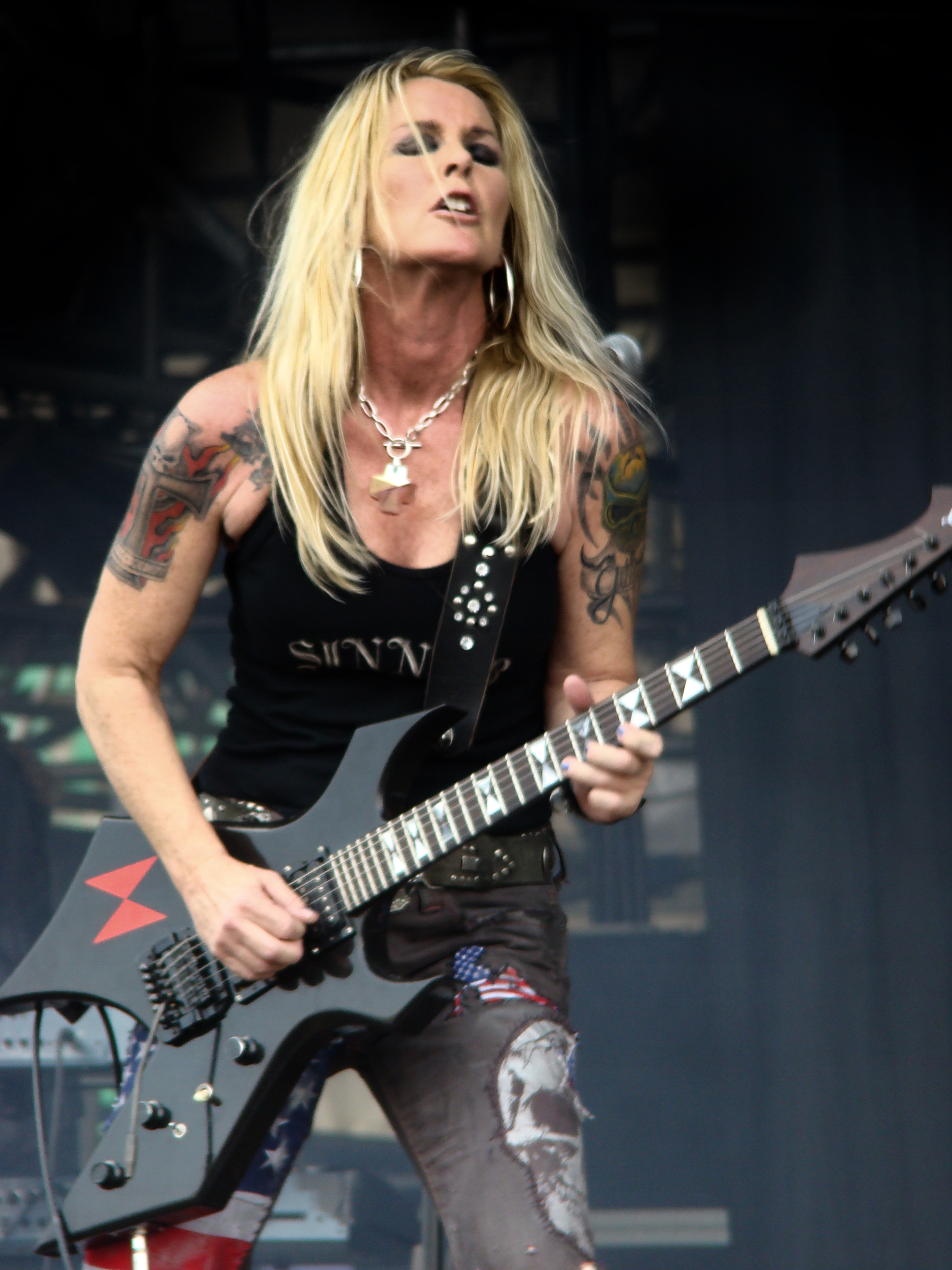 ØH: Did you ever visit Norway?

LF: We did, a long time ago, in the early to mid 90’s. I would love to come back, because it’s absolutely beautiful, I would like to show my kids. I’ve taken my kids with me to Italy, Sweden, Germany, Switzerland and England, and they loved it. [2016-kommentar: Noen som vet når og hvor Lita spilte i Norge i 90-åra? Hun spilte på Untouchables Hard Rock Festival på Jevnaker i 2013.]

ØH: Is it good being back?

LF: Yeah, im having a great time. Things have changed drastically, the music scene has changed, and selling a record is different today. I still feel the same on stage when I’m playing however, that hasn’t changed.

LF: No, I wanted to do it, it was time. We’ve been living in the Caribbean, on a deserted island, and as I was watching the music industry I noticed there were a lot of women out there playing guitar and singing. So I thought it would be a good time to come back. My kids are getting older, I don’t have to watch them all the time, so I can turn my back on them and just play the guitar. My older son plays guitar too, he is 12. So playing guitar was something I just wanted to do, I just missed it.

ØH: I understand that Twisted Sister’s Dee Snider played a part in your getting back into the studio? What did he do to get you back on the road?

LF: I have friends in the music industry, like Dee Snider and Robin Zander, and they’re saying to me: «Lita, don’t you miss it?» And I started thinking, and realized that I did. «So why don’t you go out there and play again?,» asked Snider. «I have a family.» «Well, take your family with you.» «Shit, why didn’t I think of that? Of course, what a good idea.»

ØH: This album must be the heaviest rock you’ve ever made. Was this intentional, or did it just happen?

LF: I always wanted to make a hard sounding record. I’ve always had the record company putting their strings around me, «no you can’t play that and you shoudn’t play that». They always wanted me to play lighter music, ’cause apparently it sells more records. But I’ve always wanted to do what I felt in my heart, and this record is heavier because we own the record company now. I can play whatever I wanna play, I don’t have anyone telling me “don’t be so heavy, don’t wear makeup or don’t wear those dresses”. This is Lita Ford unleashed.

My husband Jim sings a lot of background vocals, we work well musically together, also our voices. I may be able to play guitar like a man, but I can’t sing like a man. So I have Jim doing some low growling vocals, which adds another dimension.

ØH: Going back, it’s hard for us today how unusual it was to see a hard-rocking female solo guitarist in the 70’s? What kind of reactions did you get from journalists, fans, and other musicians as a member of the Runaways?

LF: At first, it was hard to be taken serious, because of many reasons. For instance the way The Runaways portrayed themselves, with Cherie Currie wearing a corset and me wearing hotpants, it takes a lot away from the musical side. I’m trying to put across music, while all the audience could  do was look at my hotpants – and then they don’t listen to the music as much.

ØH: Going solo, you went into a world even more male-dominated than rock’n’roll and punk rock. How was life as one of very few female stars in the world of heavy metal in the 80’s.

LF: When The Runaways broke up, I put together a three piece band. Just a bass player and a drummer, with me singing and playing guitar. There were no other singers or guitar players in the band, it was like Jimi Hendrix or ZZ Top, with no question as to who’s playing guitar or who’s the lead singer. It’s right in front of you, there’s nobody else to look at. That’s how I grabbed people’s attention, and once I did that I could add another guitar player, keyboard and background vocals, and things could grow again. When The Runaways broke up I was only 20 years old, very young and had a long way to go.

ØH: Do you think The Runaways were important for female musicians?

LF: Yeah. I think so. I think The Runaways were one of the reasons for a lot of artists started playing in a band, just not female, but also male. There are a lot of artists out there that come up to me and tell me, if it weren’t for you playing guitar, we wouldn’t be playing guitar. We wouldn’t be singing. I’ve heard of people naming their kids and dogs after us, it’s such an honor to feel that you touched so many people in that way.

Female musicians tell me all the time that I’ve paved the way for them as a guitar player. But my role models were all male. No females, not at all. I love Janis Joplin, but she didn’t play guitar. But that’s okay, we’re all guitar players. It doesn’t matter what you have hanging between your legs or between your chest.

ØH: Janis Joplin once said that as one of the few female rockers in her time she felt that she should outdrink and outcuss er male colleagues. Did you ever feel like that?

LF: No, actually I didn’t feel that I had to outdrink or outcuss them, although I could if I wanted do.

ØH: Was The Runaways taken seriously in their time?

LF: The Runaways were considered punk rock, like the Ramones. Everybody would spit on each other, that was something you had to do, outspit each other. I learned to spit very well. I can still be driving down the street, roll down the widow and honk out a big gob. The the kids will look at me and say “mom?!”. There were a lot of people who said “girls don’t play guitar” in the 70s, but when I heard that crap I just wanted to go home, practice and be better. Better than the people who said that.

ØH: Did you feel more at home as a part of heavy metal in the 80s than punk in the 70s?

LF: Punk at the time was dying out, and heavy metal was growing, becoming bigger. Led Zeppelin, Jimi Hendrix and Black Sabbath broke the ice for the the heavy metal era, so the whole time I was in The Runaways my heart was saying “play heavy metal”. When I did my first solo record, it wasn’t as heavy as I wanted, because I had to deal with  the record company, it ended up as a different style of music than I wanted.

ØH: But still, you were one of very few women in a musical genre dominated by men?

LF: After The Runaways I didn’t have much of a problem with this in the 80’s. I never thought about this, it never bothered me. I liked being the only woman, I felt the world belonged to me, I had no competition. Of course, there were other female artists who could sing great, like Chrissie Hynde,  Pat Benatar, and Heart. They were wonderful.

ØH: What are your plans for the next couple of years?

LF: My husband and me are always writing songs, and now we are also negotiating a reality show. It should be out in early 2011, and it’s about our family, partially filmed in our home in the Caribbean, and partially with us touring and travelling. It will be about everyday things, like Gene Simmons’ Family Jewels, and The Osbournes: Being home, mopping the floor, playihg guitar with my son, walking the dogs. Everyone wants their own reality show today, and it’s like getting a great record deal, you have to get the right people, and hope that it flies.

ØH: What about a book?

LF: I will probably write my book, but not yet. I am not close enough to the end, only half of it is “written”. [Her memoir Living Like a Runaway was published in 2016.]

ØH: Have you seen The Runaways movie?

LF: No, I haven’t. I don’t know about that. I really don’t think they should have called it The Runaways, I’ve heard that they should call it Joan & Cherie, it’s more about them.

ØH: Are you happy that you don’t play a big part of the movie?

ØH: So no Runaways reunion in the works?